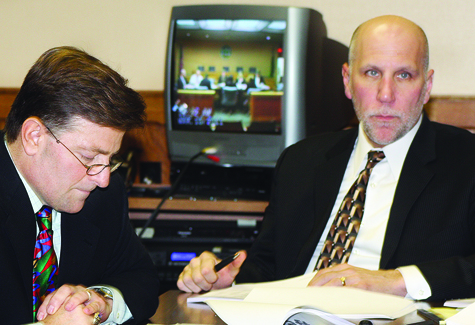 An investigation into the possibility that Riverhead Town equipment was used for private business may expand beyond one individual as it progresses, according to Councilman George Gabrielsen.

The investigation focuses on whether Mr. Rothaar or anyone else used town equipment to conduct private business from the accounting department’s offices on Pulaski Street in Riverhead, Mr. Gabrielsen said.

“It appears it may widen,” Mr. Gabrielsen said of the probe, which is now being handled by outside labor counsel instead of the town’s own attorneys.

“I’m really just concerned about the taxpayer,” he said, explaining his outspokenness on an issue that Supervisor Sean Walter has repeatedly referred to as simply a “personnel manner” while declining to offer details.

Mr. Rothaar, whose town salary is $123,186.11 this year, served as treasurer of candidate Chris Cox’s campaign for the Republican congressional nomination in 2010.

Mr. Gabrielsen gave no indication that the allegations have anything to do with campaign work having been performed at town offices.

Asked whether the district attorney should be involved in the ongoing probe, which some have suggested, Mr. Gabrielsen said he is not “recommending it. But I wouldn’t have a problem with it.”

Mr. Gabrielsen said he was especially upset last Tuesday after learning that the meeting with Mr. Rothhaar had been held outside Town Hall to accommodate Mr. Rothaar’s lawyer. Mr. Gabrielsen said he had understood the meeting to have been a “Weingarten hearing,” an official procedure under state law in which a municipal worker responds to suspicions of wrongdoing. It should have been conducted at a town facility, not the employee’s lawyer’s office, he said.

The councilman said that after he had “raised a stink about it” Tuesday, oversight of the investigation was transferred to outside labor counsel, identified by Mr. Walter as attorney Richard Zuckerman of Melville, rather than the town attorney who had been handling the probe.

“We asked [Mr. Rothaar] to come in Monday,” Mr. Gabrielsen said. “The attorney couldn’t make it, which I can understand, but then the next thing I hear is [the town attorney and deputy supervisor] are meeting out in Brookhaven, in Rocky Point. Are you kidding me? Then it was determined by others that, basically, it was going to be handled by outside counsel.”

He said the Town Board is expecting a full report from Mr. Zuckerman.

Mr. Rothaar, a certified public accountant, is the town’s financial director. He operates an accounting and financial services business from his Miller Place home and is a paid member of the Brookhaven Town Accessory Apartment Review Board, according to financial disclosure statements filed with the town and previously acquired by the News-Review.

Mr. Rothaar was treasurer of the Roslyn School District when three top administrators and others were indicted and later convicted in an $11 million embezzlement scandal that ran from 2005 to 2006. He was never criminally charged. A state audit conducted in the scandal’s aftermath found that, “although the District appointed a Treasurer, William Rothaar, in our opinion, he did not provide adequate oversight or take responsibility for the duties he was required to perform.”

Mr. Rothaar then worked in the Town of Brookhaven’s finance department before a change in administration forced him out. He came to Riverhead as interim finance director in April 2006, following the disability retirement of Jack Hansen. Mr. Rothaar was hired the following April as the department head.

He could not be reached for comment this week.

“These are personnel issues,” Mr. Walter told the News-Review when asked about the probe last week.

Matt Hattorf, who heads the town’s Civil Service Employees Union, said Mr. Rothaar had a right to a hearing under civil service law. But because he’s a department head and not a union member, it made sense that Mr. Rothaar would hire a lawyer to accompany him to the hearing. “They probably have to secure their own lawyer, so maybe it’s at their offices” instead of in Town Hall.

Mr. Hattorf said no CSEA members from the accounting department have been asked to appear in connection with the investigation.

“I’ve heard second- and third-hand but I haven’t seen anything concrete” as far as allegations go, he said. “I’ve inquired and I get told that it’s an ongoing investigation. They haven’t called any of my members in, as of yet. And if they do, we’ll do what we’ve got to do.

“The town has a right to conduct an investigation; you can’t stop them from doing that,” Mr. Hattorf said.

Mr. Hattorf said he didn’t think the town would find that Mr. Rothaar had committed any serious breaches of proper conduct.

“Bill Rothaar’s not stupid,” he said. “My personal opinion is I don’t think he’s going to put himself in that type of position where he could be brought up on charges. Maybe I’m wrong. But I don’t see him jeopardizing his career.”

During a Town Board work session Thursday, Mr. Walter said there should be better policies “that guide us in some of these personnel issues,” such as employee behavior as well as staffers and elected officials speaking to the press on internal matters.

He suggested that Town Board members come to today’s April 14 work session with some ideas.

“So there’s no law on the books that says you can’t use municipal property for your own personal business?” Councilwoman Jodi Giglio asked.

“I don’t even want to go there,” he responded. “Let’s just deal with the policy.”

Mr. Gabrielsen later told the News-Review that he had pulled a resolution that would have put a related policy on the books in 2000.

“We don’t need to reinvent the wheel here,” he said.