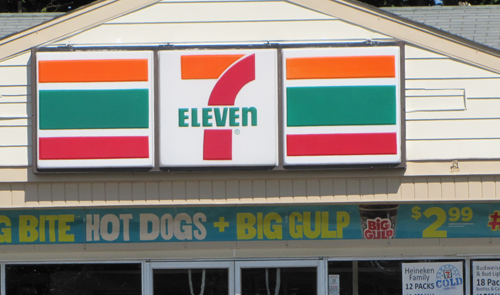 Petitions. Picket signs. Whistles and horns. Your local Democratic party leader comparing it to Walmart, which has “destroyed America.”

Petitions. Picket signs. Whistles and horns. Your local Democratic party leader comparing it to Walmart, which has “destroyed America.”

Dozens of letters to the editor.

The folks in Flanders, however, have taken another tack to try and stop a local “Sevs” from opening. They’ve waited until after construction started to raise concerns publicly, despite News-Review coverage of the store’s coming dating back to December, when plans for a 7-Eleven at Flanders Road and Cypress Avenue were filed.

All isn’t lost for Flanders residents, however.

If they keep up the fight, the company might see to it that a “countrified” version of 7-Eleven — complete with dry-stacked veneer stones and faux shingle siding — be built to improve the franchise’s appearance. You see, the Mattituck protesters never won their battle; they just got a prettier store.

I’d caution Flanders residents against fighting too hard, though. Just look at what happened on Route 25A in Wading River, where locals successfully protested a planned 7-Eleven in the 1980s and instead got a McDonald’s — albeit a “countrified” McDonald’s.

This all got me to thinking. What the heck is wrong with 7-Eleven, anyway? I can understand complaints about Walmart putting mom-and-pop shops out of business and altering the faces of entire communities, but are 7-Elevens really shutting down local pizza parlors and chasing away bagel shops? Are they undercutting the local IGA?

And is having a convenient place to buy milk or allergy medicine in the wee hours really so bad?

Despite everyone’s fears, the bump in traffic at the Mattituck location is barely noticeable — at least to me, and I work just a few blocks away.

When reached this week, Vince Taldone, a Riverhead resident who serves as president of the Flanders, Riverside & Northampton Community Association, admitted the community has been late in its protest of the 7-Eleven. He said the delayed reaction was due, in part, to the fact that the 7-Eleven crept up quietly, eventually supplanting the original plan for a mom-and-pop market, which most residents were expecting at that location.

Many of the people who have come to him and the community association recently with concerns, he said, fear the store will become a pickup place for migrant workers headed farther east. But he doesn’t see that happening, mainly because the Flanders store isn’t in a central location like with the Southampton 7-Eleven, which served as a hiring hall for years.

He thinks a real concern, however, is safety in that area of Flanders Road — for both vehicles and pedestrians.

“There’s a constant flow of cars moving fast, and you’ll have people turning into the parking lot at a pretty fast clip,” Mr. Taldone said. “This would be high-volume and it’s going to be tricky for cars getting in and out. Although it’s legal and meets the zoning, we really question the wisdom of a 7-Eleven on this corner.”

But at the same time, he said, Flanders and Riverside residents have been pushing for years for more commercial development in the hamlets to ease the residential tax burden. While 7-Eleven isn’t exactly Whole Foods, it’s something new and shiny along a corridor that at times looks like a place time forgot. Mr. Taldone speculated that the overall resistance to 7-Elevens everywhere might have been what led the company to choose the tiny corner plot far away from other commercial areas in the first place.

He suspects too that, in the end, people will likely be satisfied with the store’s convenience and other benefits.

“It’s a commercial building; it will pay a substantial amount of taxes to the school district,” he said. “People won’t have to drive to Hampton Bays or Riverhead. If we had known from the start it was going to be a 7-Eleven, maybe we would have pushed for a different intersection. But it serves its purpose; if you need a quart of milk on a Sunday night, there it is, and you’re a customer.

“It’s a running joke,” he continued, that “everyone hates a 7-Eleven until you need one.”

To underscore his point, think back to what was perhaps the loudest protest in recent decades against an East End 7-Eleven — in the Village of Sag Harbor. That store eventually opened on Water Street, right in the heart of the historic business district. Its owner was later elected mayor.

The company’s slogan isn’t “Oh, thank Heaven” for nothing.