Joe Gergela remembers playing basketball inside his neighbor’s barn on Main Road in Jamesport — a roomy, lofty barn that dates back to 1884 and measures 40 feet wide, 45 feet deep and 2 1/2 stories tall.

“Me and Danny Kaelin would go in there and play,” he recalled. “At that time, Corwin Tuthill, the owner of the barn, was a veggie farmer like we all were back then.”

How the times have changed.

Though the hoop is still there, soon enough, that barn and the house it belongs to will likely find themselves on the National Register of Historic Places — the 11th such location in Riverhead Town. And someday, if the property owner’s plans work out, it may become a retail location with a wine-tasting room on site.

Dayna Corlito of Hampton Bays, who was born and bred in Brooklyn, said that after 24 years in the financial services industry, she needed a change of scenery.

“I wanted to do something in the wine and food industry,” she said. “A next-chapter-of your-life kind of thing.”

So a couple of years ago, she purchased the lot at the east corner of Main Road and Tuthills Lane in Jamesport, where Century 21 Albertson Real Estate is and will remain. She also bought an adjoining lot, from Mr. Gergela’s mother, with her dream in mind.

With his signature last week, Gov. Andrew Cuomo added the main parcel to New York’s own register of historic places, a list that contains about 5,700 other parcels statewide. It was one of two in Suffolk and 25 others added to the list. The state approval generally means a rubber-stamping of federal approval. 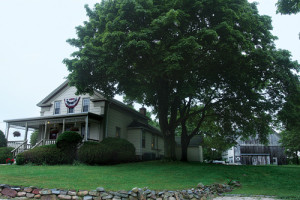 Ms. Corlito’s application to the Department of the Interior for federal recognition of the property says the main structure on the site was built around 1840 and first belonged to Daniel Tuthill, whose family already had deep local roots dating as far back as 1612.

The home was built in the Greek Revival style, which wasn’t common in New York at the time but was extremely popular in New England. Characteristic of that style are the low-pitched roof, the 1 1/2-story height and the pediment above the front porch. Though nobody knows for sure, the application posits that the building’s style could indicate more of an allegiance to New England than to neighbors in western Long Island. Richard Wines, chairman of the town’s landmarks preservation committee, noted that farmers here were simply more conservative.

Either way, according to the application, the home’s elegance pointed to the advancement of the Riverhead farmer.

About 45 years later, Daniel Tuthill’s son Henry constructed a barn in the English style typical throughout the Northeast. After another 45 years, William Moses Tuthill built a potato barn on the far east side of the property — as many today can still recall, a testament to the main crop at the time.

While federal historic recognition limits what can and cannot be done to the exterior of the main house, uses on site are not limited because of any historic designation. Ms. Corlito said that during the process of getting on the historic register, she shared her site plans with the state “and they were OK with the improvements.”

“I’m a big history buff,” she said. “And I thought that it would be wonderful to have a property that was historic and I knew would be preserved.”

Ms. Corlito, 45, purchased the property for $585,000 and the abutting vacant lot for $175,000. But the expense involved in maintaining a piece of national history will continue, she said, as an additional $1.2 million in upgrades is in the works. Most of them are structural, she said; for instance, the barn has to be lifted from the ground for foundation work.

Because the property lies in the Rural Corridor zone, the wine retail shop would require setback and retail variances from the Zoning Board of Appeals.

Feedback from neighbors has been mixed so far and she said anyone is welcome to drop by and talk about the project.

Although the property is no longer agricultural, it would — should Ms. Corlito obtain her permits — continue that tradition by focusing on wine, the area’s latest cash crop. In fact, according to Mr. Wines, other nearby structures that once housed Tuthill family members have already been converted for such uses. The tasting rooms at Jamesport Vineyards and Sherwood House were previously owned by that family, he said.

As for the basketball hoop? That’s not going anywhere.

“I promised Joe I wouldn’t take it down,” Ms. Corlito says.

The more things change, the more some things stay the same.

Caption: The historic Tuthill home and farm at the corner of Tuthill Lane and the Main Road in Jamesport.

Correction: A previous version of this article stated that the owner is seeking to put a wine bar on site instead of a wine tasting room.