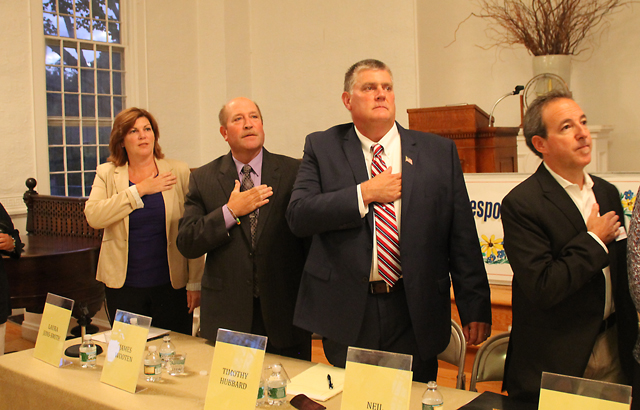 Among candidates’ answers at Thursday’s debate in Jamesport, a common refrain stood out: the Riverhead Town Board must always serve its residents first.

But is the Town Board successfully doing that now? The answer depends on which candidate was being asked.

Four of the five Town Board candidates up for election this November gathered at the Jamesport Meetinghouse Thursday evening for the first of two debates hosted by the Jamesport-South Jamesport Civic Association.

The questions posed by Ms. Keller during the roughly hour-long debate largely focused the tone at Town Hall, missteps in the case of Costco tree clearing, and whether the town was moving in the right direction.

This is what each candidate had to say:

On police experience and whether that was enough experience to serve on the Town Board:

Tim Hubbard: I love community service. I’ve spent my life working community service and public service for this town. I was on the school board for a number of years and dealt with a budget that was in excess of $100 million … I may not have a business degree, but I have common sense and that’s something this town needs.

Laura Jens-Smith: I think one of the hallmarks of the board is to have diversity and to have people bring different … experiences to the board to make well rounded decisions and to look at things with a different point of view … I’m on a school board now and I also preside over a large budget.

On the ability to build a consensus on the board, especially as a minority:

Krupnick: You see a lot of finger-pointing on this board … I’ve been able to sway people who were on the opposite side of an issue to my side. The important thing is to do the right thing for this town. I think people are tired of deals that benefit the few and not the many. I think people are tired that they have to go and fight the town on issues … The board needs people who will listen.

Jens-Smith: I think it is a skill on a board to be able to come up with a consensus. I think that’s, many times, something this board is lacking. They may have a plan. They may have a vision, but they aren’t able to execute it … I think the board should be about function, not about personality. I think it’s about time the board work together.

Wooten: Yes, it is about consensus building… but I can tell you, personally, I’ve always represented the community. I’ve always taken an interest in what neighbors want … The town is definitely moving forward … We’re not dysfunctional. We do talk to each other and we do move in the right direction.

On what should be done differently with the town’s finances, if anything, and why Mr. Wooten passed budgets without revisions:

Wooten: A lot of the budget shortfalls that we’ve experiencing were long prior to me … There were attempts to reduce staff, over 10 percent, to consolidate services … I went over [Supervisor Sean Walter’s] budget and then went over alternative budgets other people proposed. [Mr. Walter’s] was a sound budget. I felt by calling for a vote … it would just set the stage for more of that bantering back and forth.

Jens-Smith: I’m sorry, Jim, but if there’s ever a time you’re going to fight on the Town Board, it should be over the budget … IDA tax breaks cost this town a fair amount of money. You, or any other board member, maybe could have directed the IDA about where IDA tax breaks should happen. The other way is to look at underperforming assets in town.

Hubbard: Unfortunately, our supervisor chose to use a lot of money out of reserves and the reserves are nearly depleted now. That creates a problem and there’s probably going to be a tax increase coming up … I will work hard on the budget and if I’m not happy with the supervisor’s budget, I darn well am going to have my own budget to put forward.

Krupnick: To blame Sean [Walter] for everything is really disingenuous. This board didn’t figure out any way about how to bring in new income. What are the new ways? There’s no accountability … Tony Coates offered our proposal for a solar farm at EPCAL. We could have already brought in $18 million over the last two years.

On Ms. Jens-Smith’s lack of visibility and what she would achieve:

Jens-Smith: I’m active in my community. I’m active in my neighborhood … We need to look at the Master Plan. A lot of what goes on in this town is based on what we came up with in that master plan.

Wooten: We do review the Master Plan … I don’t think it’s time to really throw that out. I still needs to be tweaked but it has certainly worked well for us over the years.

Hubbard: I lot of people here know me and I know you … my track record speaks for itself.

Krupnick: I hope this isn’t going to be a popularity contest. This is going to be about who has a handle on the issues, who’s going to do right by the town.

On the Costco tree-clearing scandal:

Hubbard: There have to be ramifications. It sounds like some investigation needed to be done to find out where the ball was dropped … There has to be some accountability and if I am privileged enough to be elected to the town board, there will be accountability.

Krupnick: How about if we just prevent these problems from happening? The problem is there are no watchdogs on this Town Board. What happens is we rely on you … We need a Town Board that’s going to look out for the community and preserve our quality of life.

Wooten: There was a loophole that we did not see and we did correct that … I certainly don’t think we’re ignoring the public or that we’re asleep at the wheel.

Jens-Smith: The Town Board should be the eyes and ears of the town … At Costco, they cleared all the sand down there. They flattened land and they’ve taken away the trees. Well, they had money in escrow. That wasn’t taken away for planting the trees … There is no consequence for the actions that these developers are taking, and I think we’re all aware of that.

On whether outside clients like developers are given preferential treatment. On how to re-energize a frustrated public. On how to get people to “do what they know is right for the town and the community” and how to stop “a lot of things that don’t get closed around to close the loop”:

Hubbard: I’ll be honest, I don’t understand the question … I mean, what is your question? I’m going to pass on this because I want a question I feel I can answer. [applause]

Krupnick: I kind of do agree with Tim that there were about 5,000 questions in there … But we need to obviously change how we deal with business people … I think the problem is the town has to get smarter. I hope that answers part of your question.

Wooten: I think most of your question revolves around frustration … I’m the only Town Board member to stand against the IDA and the tax credits going out.

Jens-Smith: I think the length of time this board takes to do things is incredibly long and that needs to change … I think sometimes people do feel disenfranchised with the town. I think that is a perception that has to change and that change has to come from the board members … A perfect example of this is the amount of money spent on this campaign by outside interests. For the Republican campaign, Suffolk County [police] have spent $125,000 in our neighborhood. They spend a lot of money here and it’s not for no reason. They want to take our police department and move it to Suffolk County.

On the CPF fund and how development rights could be used to preserve more:

Hubbard: We need to apply the TDR rights. We need to enforce them. It’s necessary to do in order for the process to go forward … It’s important that we get everybody involved.

Krupnick: Obviously, preserving our land is a priority. As far as our CPF fund is concerned, we need to go up to Albany and seriously lobby to refinance that loan.

Wooten: I absolutely agree with the TDR program … We need to preserve what makes Riverhead great … I sit on the open space committee and we talk about it all the time.

Jens-Smith: I think one of the major things is to take the CPF fund and lobby up in Albany.

Hubbard: I ask that you consider my past experience when deciding who to vote for in November. My commitment to service is not over yet … EPCAL will soon have a subdivision map … Code enforcement needs to be expanded and linked to the police department to form a cohesive relationship that will crack down on multi-family residences and illegal business within the town … I will not be afraid to make difficult decisions for the Town of Riverhead because the people of this town deserve better.

Krupnick: I believe the people of Riverhead have a real clear choice this November. You can go with business as usual or you can go with fresh ideas. Business as usual has not worked out well here … The sad truth is we wouldn’t have even needed to discuss some of the issues brought up here tonight if the current board had actually done its job … None of the issues we’ve discussed are Republican or Democratic issues — they’re Riverhead issues.

As they say, there’s a first time for everything. Former champion Kyle Soper of Manorville became the first repeat...