Visitors to the North Fork next year may find new sculptures of wildlife made of untraditional materials — say, a jellyfish with fishing line as tentacles or a sea turtle whose shell is made of green sea glass.

Thanks to a $10,000 grant from the federal government, local environmental advocacy organization Group for the East End will run a series of beach cleanups along the coast of the Long Island Sound, but it will do so with a creative twist.

Rather than simply move all the trash picked up to a separate location, organizers will donate all of the debris to local artisans, who will then make sculptures of wildlife. Those will be displayed in public locations across the North Fork, including the Riverhead Aquarium.

“It’s the ultimate recycling project,” said Aaron Virgin, vice president of Group for the East End. “You’re creating something that can be used for public knowledge and to cross that gap between cleaning something up and throwing it away again.”

The project works on several levels, Mr. Virgin said: cleaning debris off the coast has an immediate positive impact, and donating the debris to local artists gives helps the group “cross-pollinate” with other organizations while promoting creative means of recycling.

And once those sculptures are complete and standing in public places, organizers hope they will serve an educational purpose.

“We want people to become knowledgeable about coastal pollution in the area,” Mr. Virgin said. “If we can showcase the impacts of coastal debris on wildlife in the form of art, we think there is going to be a big paradigm shift.”

Each beach will see at least two sessions next year, one in the spring and one in the fall. Mr. Virgin hopes to have about 100 volunteers at each cleanup, and he said they will likely begin in April once the weather has stabilized since each storm dumps more debris.

Some volunteers will even be invited to attend animal releases conducted by the Riverhead Foundation.

“We try to make another connection: you helped us with the coastal debris, and now this animal that has been impacted has been released,” Mr. Virgin said.

His organization received its $10,000 grant as part of $1.3 million in federal dollars announced last month through the Long Island Sound Futures Fund, which helps distribute funding to projects aimed at maintaining the health and ecosystem of the Sound’s watershed. The money is pooled from the Environmental Protection Agency, the National Fish and Wildlife Foundation and the U.S. Fish and Wildlife Service.

The money will be used for cleanup supplies, including reusable burlap bags, art supplies, funding for partner organizations and stipends for some of the artists.

“This is the beginning of something we hope will become an annual thing,” Mr. Virgin said. “This is one of our ways of doing something and getting the word out that these small things can have a big impact.”

Photo caption: Driftwood like this, seen at Orient Beach State Park on Wednesday, will be picked up and recycled into sculptures thanks to a grant given to the Group for the East End. (Credit: Chris Lisinski)

Keep looking up at towers and telephone poles and you will see more osprey than in years past as... 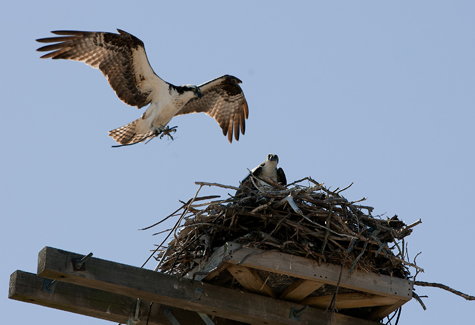 Less than a week after Gov. Andrew Cuomo announced the state is preparing to sue the Environmental Protection Agency, local officials and... Governor may take legal action against EPA over proposed dumping

Gov. Andrew Cuomo, backed by about 30 elected officials, announced on Thursday the state may take legal action against the Environmental...