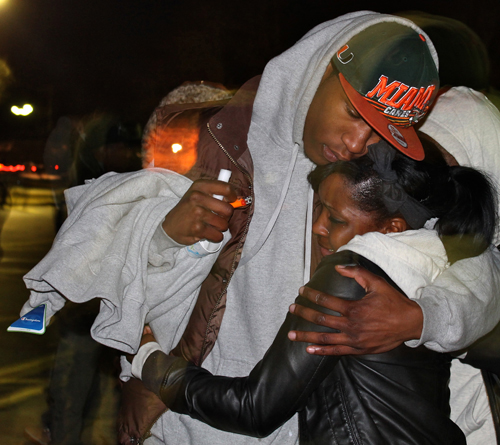 The Riverhead community was shocked when Demitri Hampton, a well-liked Suffolk Community College student, was murdered in a Riverside home during a botched burglary in January 2013. His killers remained on the run for nearly two years.

But finally, in October of this year, Mr. Hampton’s family, friends and the Riverhead community got some closure when four people were arrested in connection with his death.

Michael Parrish, 26, of Coram; Danielle Hall, 39, of Calverton; and Corry Wallace, 40, of Riverhead were all charged with second-degree murder. On Oct. 30, a few days after the trio appeared in court, assistant district attorney Glenn Kurtzrock said that a fourth suspect had been identified as the shooter.

Messiah Booker, 27, who is incarcerated upstate on weapons charges, is believed to have fired the bullet that killed Mr. Hampton. Mr. Parrish and Mr. Wallace are believed to have entered the home with weapons, with Ms. Hall driving the getaway car.

Mr. Hampton was fatally shot after the three men entered his cousin’s home, where he was staying with his girlfriend, around 3 a.m. Jan. 27, 2013. The 21-year-old Riverhead High School graduate was up late playing video games in the basement and came upstairs to confront the men. He tried to fight them off in the kitchen, but was shot in the chest. He later died of his injuries at a local hospital.

Mr. Booker remains incarcerated upstate. The other three allegedly involved with the crime — Mr. Wallace, Mr. Parrish and Ms. Hall — are being held without bail at the Suffolk County Correctional Facility in Riverside and are scheduled to appear in court in early February for conferences.