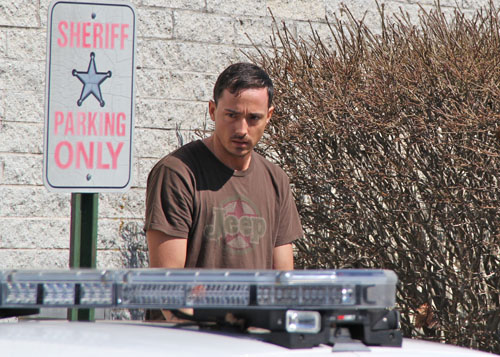 The sexual assault case against Curran Lee Kirchner hinges on one central question: Who had control?

In his closing statements Monday, prosecutor John Cortes said it was the 34-year-old Wading River man who was in control. According to the assistant district attorney, Mr. Kirchner drugged two women — whom he knew personally — to the point of helplessness with Xanax, videotaping and photographing them multiple times over five years while he performed sexual acts without their knowledge.

“This defendant … did this for his perverse sexual desire,” Mr. Cortes asserted. “This is what satisfied him. This man is a predator.”

But Mr. Kirchner’s public defender, David Geller, said prosecutors and police investigators chose circumstantial evidence to pin on Mr. Kirchner and have no direct proof of the crime. He also said the alleged victims, contrary to their testimony on the stand, were not physically helpless but engaged in the sex acts through their own consent.

Mr. Geller chalked the allegations up to one victim’s anger and embarrassment.

“This is just her anger and trying to hurt my client without the evidence,” Mr. Geller said of one of the victims. “[Don’t] let her emotions substitute as evidence.”

The two-week trial concluded Monday with graphic reminders of the alleged incidents, as both the prosecutors and defense made their closing arguments before a five-man, seven-woman jury. Mr. Kirchner was arrested in July 2014 after one of the women discovered discs containing photos and videos of the sex acts in Mr. Kirchner’s Wading River apartment, authorities said.

Mr. Kirchner has been held without bail in Suffolk County jail since his arraignment. He is charged with predatory sexual assault, criminal sexual acts, aggravated sexual abuse and sexual abuse, all felonies. If convicted, he faces life in prison.

The two attorneys drew strikingly different conclusions from the recordings.

Using the courtroom’s monitor, Mr. Geller pulled up a 29-second video of Mr. Kirchner engaged in a sex act with one woman. In the short clip, the woman’s eyes are closed and she doesn’t appear to be moving.

But Mr. Geller said having one’s eyes closed isn’t proof of helplessness. He also said the context of the video was missing.

Mr. Cortes pulled up other photos and videos from the evidence. In one video, a woman naked from the waist down lies on a bed as Mr. Kirchner performs a sex act. The camera zooms in on her face, which is tilted sideways on the mattress, with eyes closed. She is silent — the only noises are apparent moans from Mr. Kirchner.

Mr. Cortes then projected photos of both women’s faces. In the pictures, both of the alleged victims’ eyes are closed.

One woman’s mouth is open and crooked, as if she’s asleep.

“Is that the face of consent?” Mr. Cortes asked the jury. “Really?”

According to the felony accusations against Mr. Kirchner, he abused the two women while they were “physically helpless” due to being dosed with Xanax.

One woman was abused without her knowledge on six separate dates between 2009 and 2012, prosecutors said. The other woman was allegedly abused in August 2013 at Mr. Kirchner’s 16th Street home.

A taped phone call with one of the victims was played in court Monday. In it, Mr. Kirchner admitted to filming her without her knowledge, saying he knew she “wasn’t in the right state of mind” and that she was very drunk.

“I clearly wasn’t thinking about you at the time,” Mr. Kirchner said in an audio clip. “It was about my needs.”

In a later clip, Mr. Kirchner admits he “made a few mistakes,” a line Mr. Cortes keyed in on during his closing statement.

“No, you made more than ‘a few mistakes,’ ” the prosecutor said, turning to face the defendant. “This was cold, premeditated, deliberate.”

Mr. Kirchner, dressed in a button-down shirt and khaki pants, stared straight ahead during both closing statements.

“If anyone asks, you guys know nothing,” Mr. Kirchner allegedly wrote. Mr. Geller said his client’s words were being taken out of context.

Mr. Geller attacked the victims’ credibility, saying they were embarrassed that the photos and videos had been uncovered. He also asked the jury to consider the work of the Riverhead police detective handling the case, which he alleged wasn’t up to par.

In addition, Mr. Geller dismissed three expert witnesses called by the government — including a forensic nurse and a drugs expert — as unreliable.

“I could have saved the government time and money on the three witnesses,” Mr. Geller said. “The women weren’t drugged.”

But Mr. Cortes argued that Mr. Kirchner had the time, access and opportunity to commit the crimes. That opportunity, he said, came from the nature of Mr. Kirchner’s relationships with the victims, who trusted him.

The jury began its deliberations just after 2 p.m. but no verdict was reached. It will reconvene Tuesday.