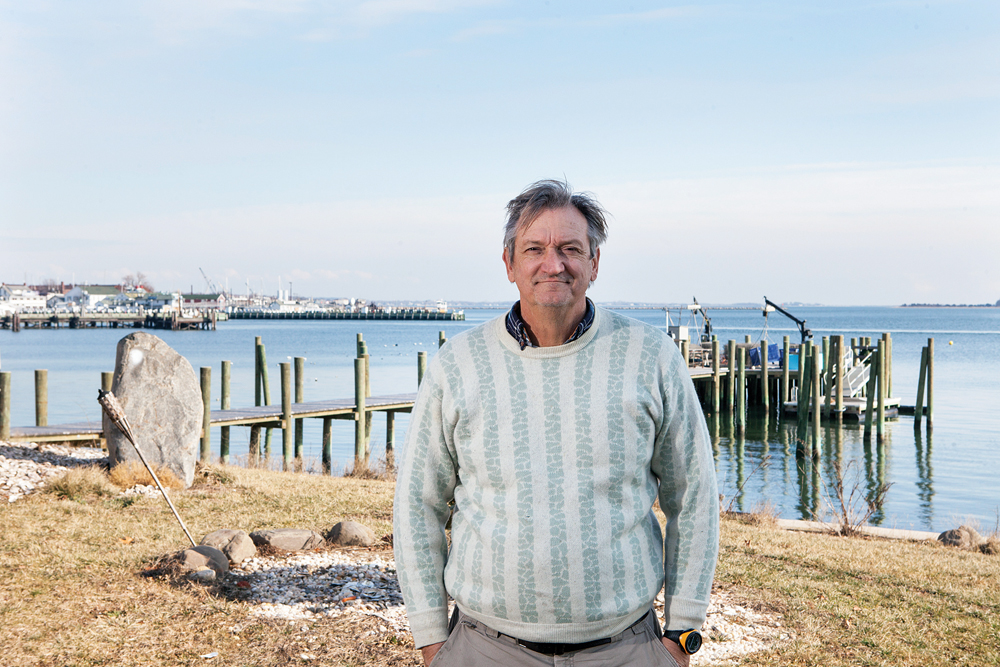 “Greenport, like towns on Staten Island, prospered from the oyster.”

So wrote John Kochiss, author of “Oystering from New York to Boston,” in 1973, pointing back to the oyster’s heyday on eastern Long Island in the early part of the 20th century.

Fast-forward 100 years or so, and things have certainly changed.

Fourteen oyster companies once harvested from local waters, where recreational boaters are more likely to be found nowadays. The number of local oyster companies can be counted on one hand and the Peconic Bay scallop has surpassed the oyster as the most sought-after local shellfish.

Greenport High School’s nickname, long ago, was even changed from the Oystermen to the Porters.

“That’s someone who carries your bags!” said Mike Osinski, owner of Widow’s Hole Oysters in Greenport, as he imitated an actual porter — partly in disgust, partly in disbelief.

Mr. Osinski was recently voted in as the first president of the newly formed Long Island Oyster Growers Association, a lobbying group for what — these days — is a niche industry. He and the new group’s secretary both started their companies after retiring from previous careers. But the group aims to bring oystering back as a viable career choice for future generations. At the very least. A sticker on the door to Mr. Osinski’s home even reads: “SAVE THE WORLD. EAT FARMED OYSTERS.”

But in fact, Mr. Osinski — who started Widow’s Hole in 2002 — and the members of LIOGA aren’t the only ones who see an increased appetite for locally grown shellfish.

In part to help fishermen across the county, Suffolk County Executive Steve Bellone has made one of his biggest goals to decrease the impacts of nitrogen on local waters — a danger for oysters and other sea creatures. Gov. Andrew Cuomo recently announced that the state would be investing in more sewering for western Suffolk, which will improve the health of Great South Bay.

Suffolk County’s Agriculture & Farmland Protection Plan was recently updated for the first time in 19 years and, unlike the original, the version approved in December actually mentions the aquaculture industry. One of the many goals listed within the 232-page plan is to “expand aquaculture activities” in the county. Another goal is to improve the county’s aquaculture lease program, which currently permits oyster farmers to lease underwater land for $250 per year for 10 acres.

“As the shellfish aquaculture industry in Suffolk County continues to grow,” the plan notes, “additional economic opportunities for other local markets that are both directly and indirectly related to shellfish aquaculture operations will emerge, such as local supplies of boats, gear, materials and shellfish seed, etc.”

Adding to the increased visibility of aquaculture on Long Island, the Long Island Farm Bureau elected its first seafood farmer, Karen Rivara, as president in 2013.

Ms. Rivara has been harvesting oysters — including young oyster seeds, which she sells to other growers, including Mr. Osinski — since 1994. She works on both sides of Long Island Sound, with outfits in Southold and another near the mouth of the Mystic River in Connecticut.

She and some other shellfish farmers launched a lobbying group, the East End Marine Farmers Association, to represent the industry in the early 2000s. She was its first president. But “everybody got busy running their businesses,” she said, and it eventually petered out.

“Mainly, it’s strength in numbers,” Ms. Rivara said of what LIOGA can bring to oyster farmers. “You have a respected organization behind you, you can get your message out and it’s really helpful for all farming disciplines to be familiar with each other and support each other.”

The re-emergence of an organization that will stand up for oyster growers is important, says the group’s secretary, Chuck Westfall of Thatch Island Oysters. Mr. Westfall grows his products in the Great South Bay, where the degradation of water quality has been “of mounting concern” for decades.

“We’re dependent, by and large — actually, totally — on a reasonably clean environment for the bay,” he said. “The future of oystering, and clean water, is sort of on the chopping block.” Mr. Osinski and a group of fellow oyster growers traveled to Washington, D.C.,for a few days this week to speak with first-term Congressman Lee Zeldin (R-Shirley) and other federal leaders about the state of the oyster industry. According to Mr. Osinski, who runs his business with his wife and two children, the United States is in an “oyster war” with Europe — but “nobody knows about it beside oyster growers.”

While winning the oyster war is surely on Mr. Osinski’s “to do” list, his first priority is bringing the shellfish back as a marketable commodity for regular families, rather than mainly a high-end restaurant offering.

“One hundred years ago, the people on the East Coast of the United States ate more oyster meat than beef,” he said, citing George Matthiessen’s “Oyster Culture.”

“There’s nothing wrong with the half-shell business. We’re growing so much we can barely keep up with it. But if we can get it back in the home, on the plate, for protein, we’re talking about a factor of 10.”

Perhaps then, as it was 100 years ago, Greenport would once again prosper from the oyster.