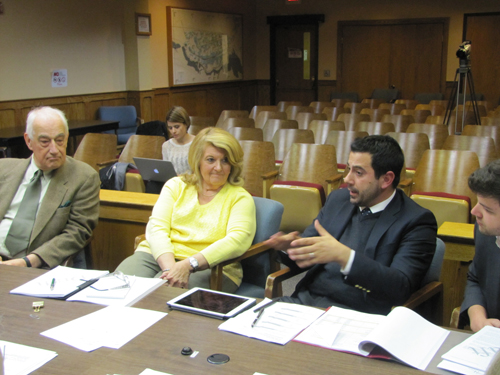 Two projects received tax incentives from the Riverhead Industrial Development Agency Monday, and two others began the process of applying for them.

Representatives of a group looking to build nearly 100 units of “workforce housing” apartments at the site of the former McCabes store on East Main Street made an informal presentation to the IDA Monday.

Georgica Green president David Gallo said the project will cost roughly $33 million, of which about $17 million will be construction costs.

The group is proposing a five-story building with about 7,000 square feet of retail on the ground floor and a combination of one-bedroom and two-bedroom apartments on the top four floors.

About 45 parking spaces are planned on the ground level below the apartments.

“The challenge is to re-establish Riverhead as a pedestrian-oriented, promenade-type town with some really beautiful apartments,” said architect Geoffrey Freeman of Riverhead, who is working with Georgica Green.

“One of the first things [Mr. Gallo] told us is ‘I don’t want to build a building that looks like affordable housing. When someone walks by this building, hopefully it will be just as good as any market rate housing on the East End,” Mr. Freeman said.

Mr. Gallo said the  organization is seeking IDA incentives, but he did not offer up any specifics.

“We’ve been drawn to downtown Riverhead,” Mr. Gallo said. “It’s a tremendous opportunity to work on the revitalization.”

He cited a project his company worked on in another area that received IDA incentives and saved more than $1 million due to the abatement on sales tax for building materials.

Mr. Gallo added that he also seeks a variety of grants and other funding sources to offset costs.

The IDA did not set an official hearing date for Georgica Green Monday.

In March, the project received site plan approval from the Riverhead Planning Board for a 45-unit affordable apartment complex, three less than originally proposed, at the site of the Long Island Science Museum. Peconic Crossing also plans to give leasing preference to artists and to have an art gallery within the building.

A joint venture between Conifer Realty of Rochester and the Community Development Corporation of Long Island, Peconic Crossing plans to buy the LISC building and demolish it.

The LISC would use the money from the sale to buy property elsewhere for the museum.

The museum would have nine months from the closing of the sale to find another location and Conifer Realty would assist in that search, according to Conifer vice president of development Allen Handelman.

An IDA public hearing on the project is set for June 6.

The Cider House project has been proposed by J. Kings Food Service of Holtsville and seeks to build a hard cider manufacturing, bottling and tourism facility in a 38,000-square-foot portion of its existing 108,178 square foot Grapes & Greens food processing building on Sound Avenue in Baiting Hollow.

The project already had a public hearing before the IDA on April 6, 2015, and it received final site plan approval from the Riverhead Planning Board last Month.

Town Attorney Bob Kozakiewicz said Mr. King had agreed to withdraw three of the claims in his lawsuit after the Planning Board granted preliminary site plan approval to the cider proposal in December, but did not agree to drop portions of the suit seeking monetary damages from the town.

Because it is considered manufacturing, the cider project would receive partial property tax exemptions that start at 100 percent of the value of the improvements to the property and decrease by 10 percent per year over 10 years.

In this case, the abatements are limited to the section of the building where the cider facility will be located.

The IDA’s standard exemption for non-manufacturing projects starts at 50 percent and decreases by 5percent per year over q0 years, officials said.

He has also proposed a five-story hotel behind the house.

In January, the IDA extended existing tax breaks for Atlantis Holdings, owners of the aquarium and the Hyatt Hotel on East Main Street, for an additional 10 years — the third such abatements it has been granted. A refinancing of those projects was also approved.

Those approvals did not apply to the Preston House project, although both were discussed at the same public hearing.

According to IDA executive director Tracy Stark-James, the IDA’s standard tax abatement for projects in downtown Riverhead is 100 percent of the value of the new construction for 10 years with no decrease over those 10 years.

Top stories of 2018: Will apartments save — or hurt — downtown Riverhead?

For years, Riverhead Town officials have been trying to come up with ways to revitalize downtown, which many feel...