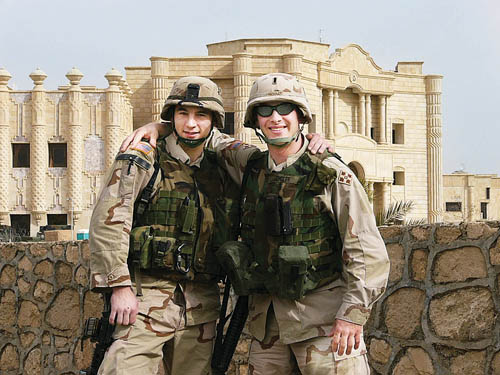 It’s hard for Debbie Venetz to pinpoint exactly when her family’s fight to secure military benefits after her husband, Anthony, died in Afghanistan took a turn toward positive resolution.

There was a chance encounter with a major general at an Army base in San Antonio, Texas, and of one of her husband’s former commanders was elected to Congress — two events that helped the family get its case in front of the powers that be in Washington.

Of course, media attention from the likes of CBS News and the Los Angeles Times didn’t hurt either, as Ms. Venetz and her two children pursued the benefits they were denied when the Wading River native’s death was ruled “not in the line of duty.”

The ABCMR decision is 63 pages long and includes many details from the investigation into the death of Sgt. 1st Class Venetz, a Green Beret who died at age 30 on Jan. 28, 2011, while awaiting transfer from Bagram Airfield in Afghanistan.

The initial “not in the line of duty” ruling stemmed from an autopsy report that reported SFC Venetz had high levels of opiates in his system — including heroin — mixed with multiple sedatives and marijuana, when he died in his bunk. The Army concluded that he died of accidental “mixed drug intoxication” and that his “own misconduct” caused his death.

This month’s decision reverses the “not in the line of duty” ruling, primarily on the grounds that the inquiry into SFC Venetz’s death did not begin until more than seven months after he died, a time frame not in line with Army standards. The delay ultimately hindered the investigation, the board determined.

The Venetz family, which includes daughter Alexa, now 12, and son Jace, now 8, is now entitled to the monthly payments awarded to families of fallen soldiers and the full-tuition scholarship programs available to their children, among many other benefits given to families trying to rebuild from tragedy.

Ami Neiberger-Miller of TAPS, a tragedy assistance program for survivors that aids families following a military casualty, previously told the News-Review that Ms. Venetz and her children were being denied more than $1 million in potential benefits over the course of their lifetimes.

The Army’s inquiry into SFC Venetz’s death lists the extraordinary number of honors bestowed upon him during his decade of active duty, including two Bronze Star Medals, one with valor; two Purple Heart Awards; four Army Commendation Medals, two with valor; and an Army Good Conduct Medal — along with more than a dozen others.

He was instrumental in the Dec. 13, 2003, capture of former Iraqi president Saddam Hussein, a fact that is detailed in “We Got Him!,” a memoir published in 2012 by retired Army Lt. Col. Steve Russell, who went on to become a state senator in Oklahoma and now represents that state’s 5th District in the U.S. House of Representatives.

Mr. Russell said Monday that the Army’s reversal was a “long time coming.”

“For someone with his record and honor, this should have been the result from the beginning,” the congressman added.

An April 2006 Army press release credited SFC Venetz, who was deployed to the Middle East four times during his 10 years of military service, with helping to pull an Iraqi civilian’s cargo truck from a crater caused by a roadside bomb.

The commendation on his Bronze Star Medal with Valor states that just four months before his death, SFC Venetz placed “effective and accurate fire” on the enemy for two days despite being wounded by gunfire during the combat incident in Jangalak Village in Afghanistan.

Additionally, SFC Venetz, a 1999 graduate of Shoreham-Wading River High School, was credited with helping to save the life of Sgt. Rick Yarosh, who was manning a gunner’s turret in an armored military vehicle near Abu Ghraib, Iraq, in September 2006 when an Iraqi hiding in the distance detonated an improvised explosive device that ruptured the vehicle’s fuel cell. SFC Venetz was one of two men who pulled Sgt. Yarosh’s badly burned body from a canal and helped usher him to safety.

Mr. Russell said SFC Venetz was someone who “always drove himself, both physically and mentally.”

Ms. Venetz credited Mr. Russell with actively helping to bring her case to the Army at a time when her own representatives in Texas did not.

She said she felt the Army’s initial ruling that her husband’s death occurred outside the line of duty served to tarnish his name.

Her mother-in-law, Marion Venetz of Wading River, agreed, saying she views the reversal as the Army “finally acknowledging the kind of hero [my son] was.”

“Debbie deserves a lot of credit for this, too,” she said. “She was relentless in her pursuit of this. She just kept forging along.”

Debbie Venetz said she sympathizes with any other military families in a similar predicament.

“Anyone going through this should know there are so many roadblocks,” she said. “We were faithful and lucky enough to have so many people working to help us.”

After learning of the Army’s decision last week, she called her mother-in-law, whom her children were visiting at the time.

The phone was placed on speaker as she shared the news with the three of them.

“I heard a lot of screaming and crying,” Ms. Venetz said.

While the Army’s reversal brings to an end the battle for benefits, the Venetz family says there’s more to their story.

There is still, of course, what Ms. Venetz describes as “the mystery” of what happened to her husband. She hopes that one day more will be said about the events of that evening by the three soldiers who were in the room with him at the time of his death.

Until then, this week’s news will always be “bittersweet,” as both Venetz women described it.

Debbie Venetz is also currently working on a book with former Los Angeles Times reporter Tina Susman, who wrote in September 2014 about the family’s ongoing fight with the Army.

The book will also detail the battle to change the “not in the line of duty” ruling, Ms. Venetz said.

“Now it can have a Hollywood ending,” she added.