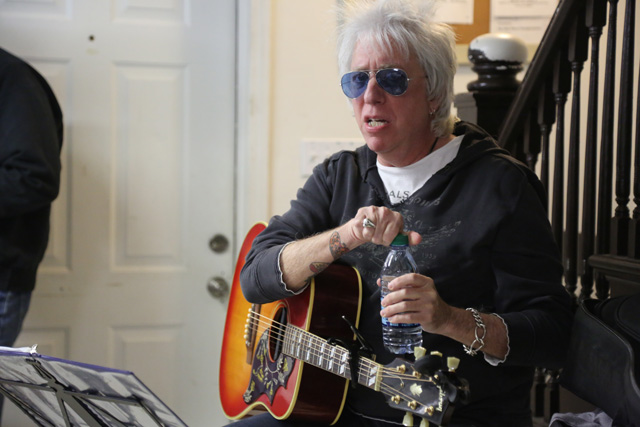 Each week at the addiction support and recovery home Mainstream House, a group of men gather to share their stories of sobriety and encourage each other.

On Monday night, the dozens of people crowded onto couches and folding chairs in the main living room of the home on East Main Street in Riverhead were joined by someone who shares their struggles, but has a bit more of a rock star pedigree: Rock & Roll Hall of Fame guitarist Ricky Byrd.

Mr. Byrd, who was inducted into the Hall of Fame last year as a member of “Joan Jett and the Blackhearts,” is himself a “recovering active addict” who grappled with drug and alcohol addiction throughout his adult life. Mr. Byrd is now 29 years sober.

Wearing a sweatshirt and jeans with blue aviators and a wild tuft of white hair, Mr. Byrd — who performed the guitar solo on the hit single “I Love Rock ‘n’ Roll” — spent Monday night perched on a stool sharing stories about his life, his journey to sobriety, advice for others and songs he wrote to encourage those in recovery.

“This is my third act,” he said. “This is my main attraction that I want to do with my career … I feel like I can be of greater use if people know.”

During the two-hour meeting, Mr. Byrd described his own history of addiction, which ran in his family. Mr. Byrd was a daily user of drugs and alcohol for 18 years while touring as a musician.

“I always say I was addicted to more,” he said. He became dependent on his addictions to function. He recalled crazy nights partying  — the “drugs, sex, and rock & roll” lifestyle — but remembered many more times when things were rough.

Mr. Byrd resolved to give up his addictions while on tour. He said other musicians made fun of him for sequestering himself away or going to group meetings while the rest partied. But he reminded those in the room that sobriety was a challenge they had to accept in their heart before they would stay in recovery.

Armed with his acoustic guitar, Mr. Byrd played a few songs he wrote that were inspired by his own journey of recovery and those he’s met along the way. In one, he played a bluesy rhythm while describing his life story.

In another song, “Addict’s Prayer,” Mr. Byrd crooned: “Here I am back in this place / My mind is reelin’ / My body aches / Ain’t no such thing as a little taste / for somebody like me.” Men in the living room nodded along as he sang and applauded after every song.

“Does anybody relate to that at all?” he asked the crowd.

Since meeting with recovery homes across the world, Mr. Byrd has started a nonprofit called Ricky Byrd’s Clean Getaway to help educate those in recovery. In an interview Monday night, Mr. Byrd said many still see addiction as a failure of willpower.

As he wrapped up the meeting, Mr. Byrd handed out signed cards to the men. Keep in touch, he said. He wanted to hear how they were doing and help. In a way, the meeting helped him too.

“When I’m in a room like this, this is really all about humanity,” he said. “This is like the place I get my medicine.”

Those words spoke true for James, a local fireman who is now 2 1/2 years sober after years of alcoholism. Afterwards, he spent time chatting with Mr. Byrd, getting his photo taken and talking about his career.

“Everything he said is true,” James said. “I was blown away.”