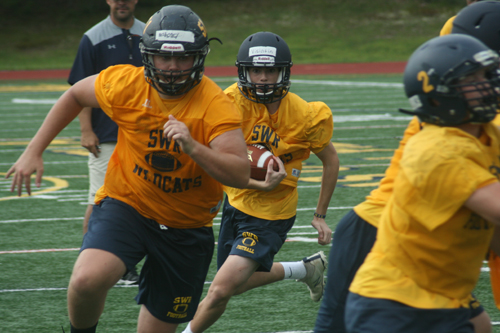 It starts with the lines.

Every high school football coach, including Shoreham-Wading River’s Matt Millheiser, knows that. Football can look almost easy for a team with a strong line, and remarkably difficult for a team without one.

“You play one season with a line that’s overmatched, you realize that no matter what you X and O, it doesn’t matter,” said Millheiser.

Superior line play was the common denominator for the last three SWR teams, which concluded their seasons with Long Island Class IV championships. Last year the Wildcats became the fourth team to win a third straight Long Island title. Over the past three years, the team has gone 34-2.

Much of the credit for that goes to the big players manning the line of scrimmage.

“Games are won in the trenches, offensively and defensively,” Millheiser said after Tuesday morning’s practice. “If you control the line of scrimmage, you put yourself in a great place on both sides of the ball to do well.”

SWR lost possibly the best lineman it has ever had in Ethan Wiederkehr, who has brought his football talents to Northwestern and the Big Ten Conference.

“You don’t replace a guy like that, but that doesn’t mean the offense and the defense can’t still be effective,” said Millheiser.

SWR is looking to seniors Dan Curtin and Liam Mahoney to lead a new-look line into the new season. Curtin is a 6-foot-3, 280-pound guard who will also hold one of the spots on the defensive line. The 6-3, 255-pound Mahoney will be a two-way starter at guard and defensive end. Both of them played for the last two Long Island champion teams.

“Most people don’t even get to win one in their life,” Mahoney said. “It’s just a great feeling.”

Millheiser said Curtin and Mahoney have “been through it. Those are our experienced guys.”

Their blocking will benefit the team’s new quarterback, Xavier Arline, and new feature back, Kyle Boden.

Asked how vital the line play has been to the team’s string of successes, Mahoney answered: “Everything. We’re like cattle up front. We need a big push up front. Our defensive line is very athletic and that’s what I’m excited about. Our offensive line is huge. We’ve got monsters.”

Having reached such great heights, the Wildcats have set the bar high for themselves, which is fine with Curtin. “We just got to do what we’ve been doing, get back there the way we’ve been doing,” he said.

SWR is seeded second in Suffolk County Division IV behind No. 1 Miller Place. That doesn’t mean the Wildcats don’t have their sights set on chasing another Long Island crown for what would be a four-peat. “It would be nice,” said Curtin.

“I think the talent up there, the strength and the size is all there,” Millheiser said of his linemen. “All the things they need to be as great as other lines [are] there.”

What Millheiser likes best about his linemen, though, is their coachability.

“Nobody’s out here to be a superstar,” he said. “I think all linemen realize that they’re not going to be on the leader boards on Newsday and things like that, but we emphasize with our guys, those are the guys that are going to get it done for us. That’s how we’re going to win and lose, and as long as the team and coaches respect that, give them their due, then I think they’re OK with being anonymous and just doing their job.”