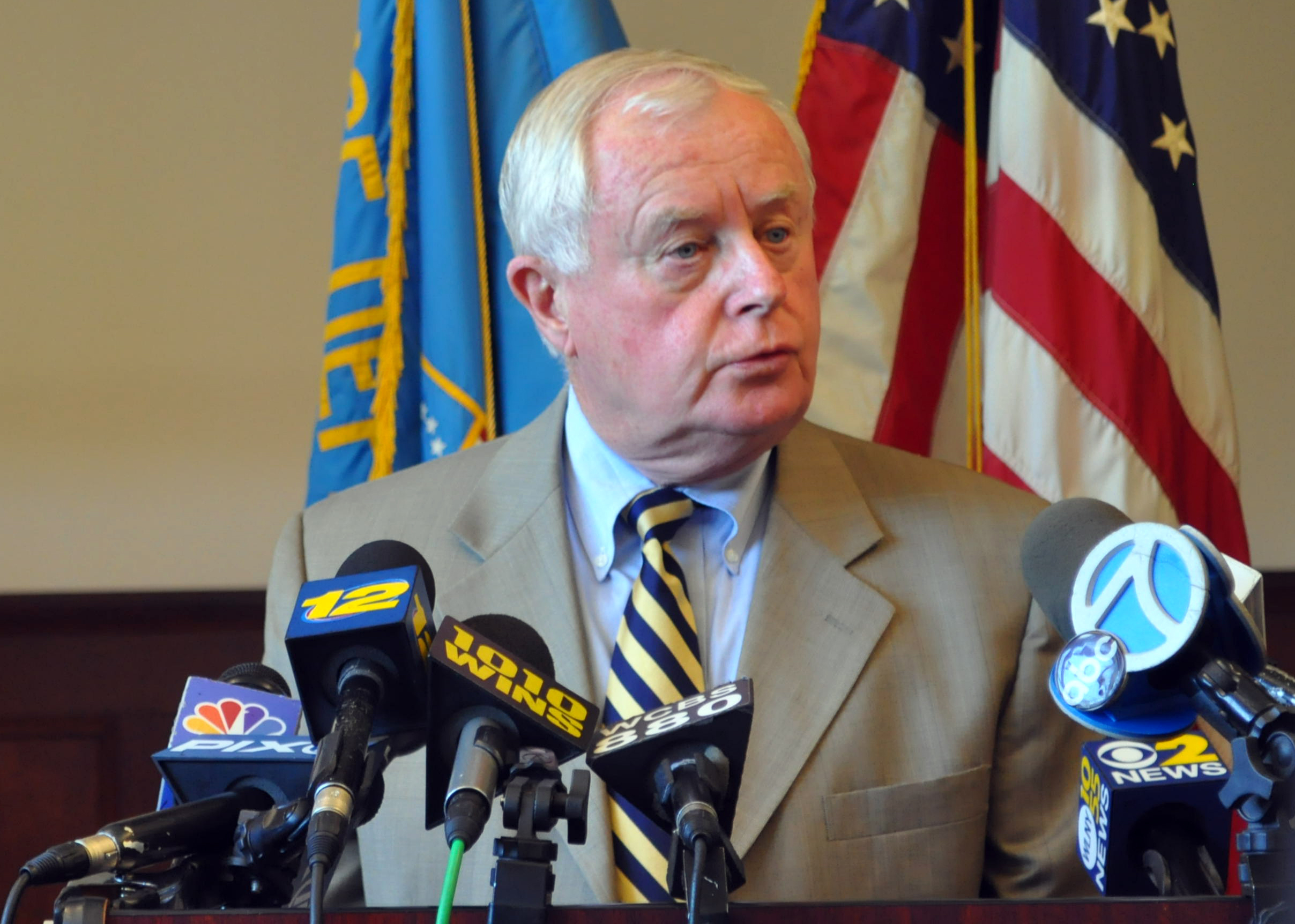 The indictment, before District Judge Leonard Wexler, alleges that Mr. Spota and Mr. McPartland— the chief of investigations and chief of the DA’s Government Corruption Bureau — sought to cover up the assault of a handcuffed suspect by former Suffolk County Police Chief James Burke, who has since been sentenced to prison himself.

Mr. Spota, 76, of Mount Sinai, had been Suffolk DA since 2001 but announced earlier this year he would not seek re-election.

Mr. McPartland, 51, is from Northport.

Both men pleaded not guilty and were released on $500,000 bond, secured by their homes, according to a spokesman for the U.S. Attorney’s Office.

“While FBI agents were working to restore justice in a civil rights investigation, District Attorney Thomas Spota and Assistant District Attorney Christopher McPartland were conspiring to obstruct it,” said William Sweeney Jr., the assistant FBI director-in-charge, in a statement.

“The crimes they’re charged with are rivaled only by the conduct they allegedly attempted to conceal.”

The four-count indictment charges the two men with:

• Conspiracy to tamper with witnesses and obstruct an official proceeding.

• Witness tampering and obstruction of an official proceeding.

• Obstruction of justice; and

• Accessory after the fact to the deprivation of civil rights.

“Prosecutors swear oaths to pursue justice and enforce the law,” said acting United States Attorney Bridget Rohde in a statement. “Instead of upholding their oaths, these defendants allegedly abused the power of the Suffolk County District Attorney’s Office, attempted to cover up the assault of an in-custody defendant, and attempted to thwart a federal grand jury investigation.”

The alleged assault took place Dec. 14, 2012, according to Ms. Rohde, when an unnamed suspect was arrested on suspicion of burglarizing motor vehicles, including a vehicle owned by Mr. Burke.

The suspect, identified only as “John Doe” in the indictment, but identified as Christopher Loeb by Newsday, was transported to the county police Fourth Precinct, where he was taken to an interview room and handcuffed to a permanent fixture inside of the room, according to the indictment.

Later that day, Mr. Burke and other unnamed officers “entered the interview room and assaulted John Doe,” the indictment states.

Mr. Loeb later confessed to the burglary, but alleged that his confession was involuntary because he was assaulted by Mr. Burke and a special prosecutor, according to the indictment.

The U.S. Attorney’s Office and the FBI initiated a federal grand jury investigation of the assault in April 2013, which led to the indictment unsealed Wednesday.

That indictment alleges that Mr. Spota, Mr. McPartland and others, including Mr. Burke, had numerous meetings and telephone conversations where they discussed the assault and “in those meetings and during those telephone conversations, agreed to conceal Burke’s role in the assault, and to obstruct and attempt to obstruct the Federal Investigation to protect Burke,” the indictment states.

The three men are accused of “using intimidation, threats and corrupt persuasion to pressure one or more witnesses, including co-conspirators, not to cooperate with the federal investigation, to provide false information, including false testimony under oath, and to withhold relevant information from” federal prosecutors, the indictment states.

Mr. Burke pleaded guilty to “a deprivation of John Doe’s civil rights and conspiracy to obstruct justice” on Feb. 26, 2016, according to a release from Ms. Rohde.

Both Mr. Spota and Mr. McPartland were required to turn in their passports. Their next court date is Dec. 1.

In May 2016, County Executive Steve Bellone, citing a “culture of corruption,” demanded Mr. Spota resign. On Wednesday, he issued the following statement: “As I have said many times before, Tom Spota must resign. The person holding the awesome power to decide whether people go to jail or not cannot effectively serve under federal indictment for corruption.”

Spota Indictment by Timesreview on Scribd