The students put down their bags and joined each other in front of the SmartBoard, where they viewed a scene featuring Tai chi lessons from the 2010 movie ”The Karate Kid.” They then followed along to an interactive Tai chi video, learning breathing techniques and specific movements of the martial art.

The exercises were just a small part of what the students have been learning over the past few weeks in Wading River Elementary School’s new World Language club, led by Ms. Vique-Kearney, the district’s English as a New Language teacher.

“They’re not as exposed to different cultures out here as they might be in the city,” she said. “I think it’s important at this age to get them prepared for the future. We don’t know for sure what they’ll be doing in the future, but we know it won’t be in a monolingual setting.”

The first year of the club, which meets for 45 minutes each Wednesday before school, was so popular that it was split into three six-week sessions. The third-graders went first followed by fourth-graders, who conclude their segment this week. Fifth-grade students will begin next week.

During each session, students learn two languages, which they can choose. Third- and fourth-grader chose Spanish and Mandarin Chinese.

“I love learning about the cultures and the languages,” fourth-grader Charlie Jache said.

In class last Wednesday, students learned to say hello and goodbye in Mandarin, and count from one to 10.

But the class isn’t devoted entirely to speaking the language. In addition to the Tai chi lesson, students had to list, in order, the top 10 languages spoken globally and name one country where each one is spoken.

They also learned about Japanese temples and the differences among Chinese, Japanese and North and South Korean cultures, and identified the flags of each nation.

The children have enjoyed the interactive lessons, and many claim they also enjoy the assignments, especially the songs and dances.

“We learned Spanish and Chinese and their cultures and dances and what they do and it’s cool,” student Olivia Pesso said.

Since the session meet only once a week, Ms. Vique-Kearney gives students homework to complete during the week, and created a Google Drive account so they students can continue to practice at home if they wish.

Although she’d expected them to return with unfinished homework, she said the assignments have been something they look forward to.

“They’re learning something new every day and I think they’re enjoying it,” Ms. Vique-Kearney said. “I try to make it fun for them.”

An student at Wading River Elementary School was diagnosed with MRSA, the Shoreham-Wading River School District announced last Wednesday. “This is...

Riverhead Town police are investigating an alleged threat made against a teacher at Wading River Elementary School. 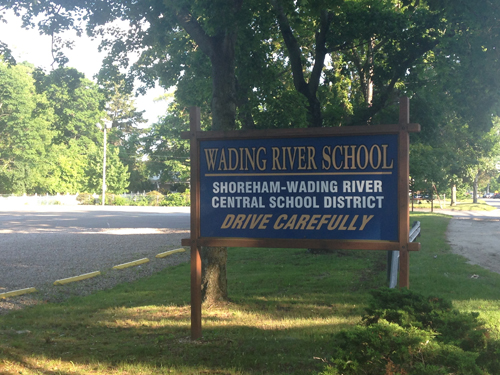 The Shoreham-Wading River school has decided to install eight new classrooms in its elementary schools as initially planned even though...