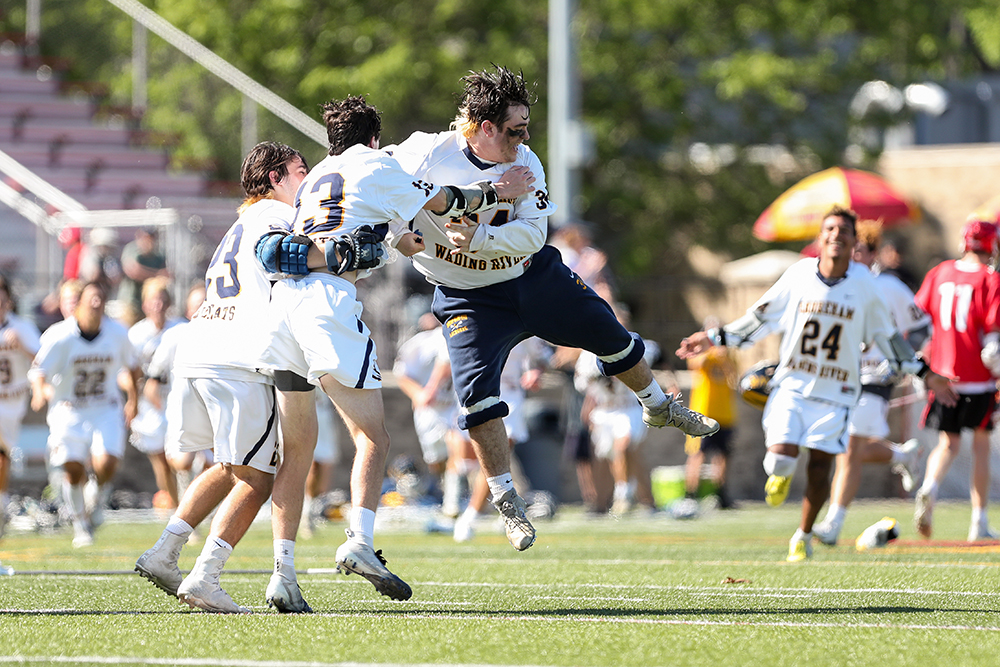 From an early age, Dominick Visintin dreamed of this moment.

The senior grew up embedded in the Shoreham-Wading River lacrosse program. He gravitated toward the sport by pre-school and watched his older brother Anthony become a standout for the Wildcats. In 2012 while in fifth grade, Dominick cheered at nearly every Wildcats game as his brother, then a sophomore, helped lead Shoreham to a state championship.

“He’s always had it over my head,” Visintin said of his older brother, who played four years of lacrosse at Saint Leo University. “He’d say, ‘I have the ring, you don’t.’ … But now I do.”

The Wildcats jumped out to an early lead, never trailed and prevailed 12-7 to win the fourth state title in program history. After two heart-stopping wins to get off Long Island — first in overtime of the county final against Mount Sinai and then a wild comeback against Cold Spring Harbor — the Wildcats encountered little drama en route to their final two wins of the state tournament.

The Red Rams came into the game with a lofty resumé, boasting 21 wins. They won their three prior playoff games by a combined score of 50-9.

But they were no match for the Wildcats (18-5), a young team that continued to grow game by game, persevered through the rigors of a tough Section XI schedule and peaked at just the right time.

“Before I even got into high school, that’s always been in the back of my mind,” Arline said of a state title. “We saw the older kids do it. They were always there for us and we wanted to follow in their name and rep the front of our jersey, which means the most to everybody.”

Arline set the tone early, scoring a pair of unassisted goals as he enjoyed a rare reprieve from a defense that wasn’t focused on him. The junior finished the game with five goals and two assists, the kind of performance that has come to exemplify his extraordinary high school career.

Teams have so frequently tried to lock him or throw double teams his way, that it came as a bit of a surprise to Arline when the Red Rams played him straight up to start the championship. He quickly took advantage of the open space.

“I haven’t seen that recently,” he said. “But I take what I can. They tried locking a little bit, making it difficult for me to get my touches in the second half. Our coaches put us in the right place.”

The Wildcats led 8-2 at halftime and besides from one brief run from Jamesville-DeWitt in the third quarter, they controlled play throughout.

Visintin, Gavin Gregorek and Johnny Schwarz all scored two goals for Shoreham. Schwarz added a pair of assists as well. The offense clicked early for the Wildcats with four first quarter goals. And the defense, with goaltender Liam Daly as the backbone, turned out one of its best performances of the season. The seven goals for the Red Rams were the fewest since a 7-6 win against Fayetteville-Manlius May 11.

Long-pole defenders Trevor Kessel and Jake Wilson both had strong games. Wilson had three caused turnovers. Tyler Schwarz was active on both ends of the field as a midfielder, scoring one goal and leading the team with four caused turnovers.

“It was a blast,” said Kessel, a junior.

He credited the work of teammate Jake Meeker, their fellow long-pole defender who is one of five seniors on the team.

“Throughout the season, [the seniors] have been leading us,” Kessel said. “We kind of did it for them the entire season.”

Gregorek, a midfielder, said as the team grew its lead Saturday, they were focused on keeping up the pressure.

“Coach Taylor was like definitely do not take the foot of the throttle,” he said. “Keep working hard, get those little plays, the ground balls, the clearing, the riding, all that implements into the greater objective.”

It led to a state title.

• The Wildcats had a 30-21 advantage in ground balls Saturday.

• Liam Daly finished with seven saves for Shoreham, five of which were in the second half.

• The Wildcats opened their biggest lead of the game at 10-2 in the third quarter on a goal by Johnny Schwarz.

• Arline scored a nifty one-handed, no look goal in the second quarter as he charged from around the cage. Players seemed unsure at first whether the ball and gone into the net and the referees had to get together before concluding it was a good goal.

• Tyler Brang was the only Jamesville-DeWitt player with more than one goal. He finished with two.

Point, game, set, match, season! And what a season it was for the Shoreham-Wading River boys tennis team. It...