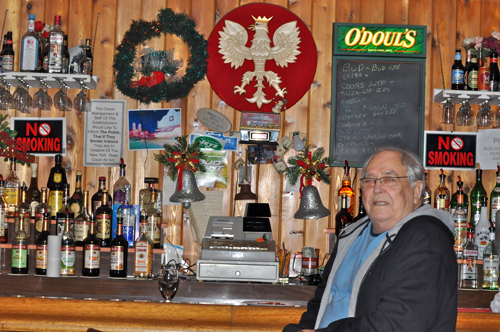 Johnny Niecko, who for more than 30 years serenaded listeners across the East End with authentic Polish polka as host of WRIV’s “Sunday Polka Time,” died Wednesday. He was 77.

Mr. Niecko had suffered from health problems in recent years which forced him to retire from radio in 2013 after 37 years on the job, his daughter Pat Raynor said.

During that time, Mr. Niecko became a well-known personality in the polka music scene; his radio show’s theme song was performed by a professional polka group and includes lyrics welcoming Mr. Niecko and his Riverhead listeners.

“Oh, he loved doing this polka program,” Ms. Raynor said. “He was very upset that he had to give it up.”

Mr. Niecko was born in Poland and immigrated to the United States with his family in 1951. He served in the U.S. Army in Japan and Korea and settled down in Riverhead.

His radio career started as a dare from his Polish barber, Mr. Niecko told the News Review in a 2013 feature story.

“He was good at what he did,” said WRIV radio host Bruce Tria. “He was just a terribly nice guy. He always walked in with his buttered roll and his container of coffee.”

Mr. Tria said that with Mr. Niecko, what you heard was was you got.

“Nothing ruffled his feathers,” he said. “The same exact guy you heard on the air was the one off-the-air.”

For decades, Mr. Niecko walked up the three-and-a-half flights of stairs to the WRIV office on Sundays to play his polka. Sometimes, Ms. Raynor said, his children and wife would tag along to answer phone calls and take down requests from listeners.

“He and Mom used to go to different places, all these different polka festivals,” she said. “They used to have a following when they would go to these.”

His death comes days after longtime volunteer and “larger-than-life” teacher Feliska Sawicka died at age 93, marking another blow to the Polish community.

“Those were two big people [around here],” Ms. Davis said.

When he wasn’t working at the radio station, Mr. Niecko worked for Riverhead Town and plowed snow in the winters. Ms. Raynor said her father would be out for days at a time during snowstorms clearing streets and would return home for a quick nap before his next shift.

During his off hours, the family used to go fishing and clamming in the nearby bays. It was all part of the work ethic Ms. Raynor said says her father taught: work hard, play hard.

In the 2013 interview, Mr. Niecko said he considered quitting the show after having a heart attack. He carried on for another nine years and “threw in the towel” when the trip up and down the stairs finally became too much.

Mr. Niecko signed off for the final time Nov. 31, 2013 with his signature farewell: “God bless America, and may the good Lord bless and keep you.”