Under sunny skies Saturday morning, pilot Joseph Fischetti of Southold took off in his Beechwood A-36 aircraft from Gabreski Airport in Westhampton Beach, bound for New Bedford, Mass.

He had intended to fly a missing man formation, an aerial salute to a deceased pilot. Friend and fellow Beechwood pilot Robert Mark was to lead the formation. Mr. Mark took off from Islip-MacArthur Airport around 9 a.m. on a flight that generally only takes 30 minutes in the air. His longtime girlfriend Susan Quagliano joined him.

Soon after, Mr. Fischetti knew something was amiss. Mr. Mark, 66, and Ms. Quagliano, 57, of Oakdale, never arrived at their destination. He began to worry. He checked a tracking app called FlightAware and discovered the inconceivable.

The plane piloted by Mr. Mark — a single-engine, six-passenger Beechcraft A-36 Bonanza — went down in a farm field north of Harbes Farm in Mattituck around 9:15 a.m. near the Riverhead/Southold border. Both Mr. Mark and Ms. Quagliano were pronounced dead at the scene. The couple’s dog, Coco, a labradoodle, survived the crash and was rescued by Harbes Farm general manager Edward Harbes.

Mr. Fischetti estimated the couple had been flying for only 10 or 15 minutes when they experienced “catastrophic engine failure.” He praised Mr. Mark for avoiding Sound Avenue and nearby homes.

“He did what we’re all trained to do: Look down and find the best field you can land in,” he said, describing Mr. Mark as an experienced pilot with over 10,000 hours of flying time. 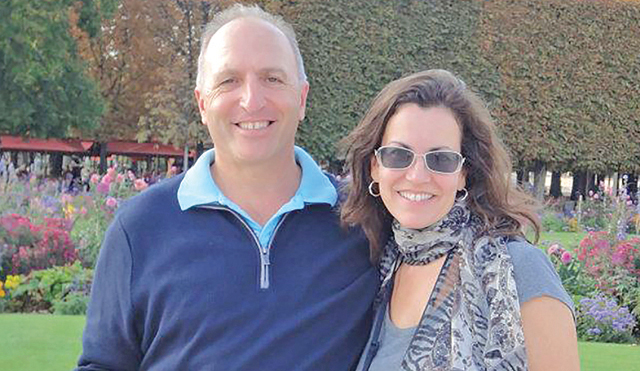 Investigators from the Federal Aviation Administration and National Transportation Safety Board are still investigating the incident to determine what caused the crash.

“Everything he did in that flight to try to land safely [that] I would have done. I have been going over that in my mind,” Mr. Fischetti said. “He did everything right.”

The two men had known each other for two decades, frequently flying together as part of an aviation group, Bonanzas to Oshkosh, which has members across the country. Mr. Mark had led formation flights of over 100 planes and had been an instructor, Mr. Fischetti recalled Monday morning, still in disbelief.

“Robert had a great personality. He’s going to be missed in our aviation community,” he said.

Members of the Jamesport Fire Department responded to extinguish flames that broke out after the crash. “We arrived on the scene and the plane was pretty much fully engulfed and burning very well,” Chief Mario Carrera said at the scene. “It was lost to the point where [the fire] was going out.”

Chief Carrera said volunteers responded with two engines and heavy rescue equipment, dousing the last of the flames while doing their best to preserve the scene for investigators.

Officers from both Riverhead and Southold police departments initially responded and tried to determine exactly where the plane had gone down. A Southold officer who arrived on scene minutes after the crash,before the fire department’s arrival, told the dispatcher: “I can’t get close enough to check for anybody.”

The last of the wreckage had been cleared from the site by Monday.

Mr. Harbes said Monday that while rushing to see what was going on and get help, he noticed a dog running through a nearby field — a dog he didn’t recognize.

“I got out of my truck and coaxed him over,” he said.

He looked after the dog until it was reunited with Mr. Mark’s family members.

That Coco was able to escape the fiery wreck without injuries is a testament to the pilot’s expertise, Mr. Fischetti said, explaining that part of their procedure for emergency landings includes opening both doors to the aircraft to ensure that you can get out once on land.

Mr. Harbes said the dog’s survival is a “small blessing … a silver lining to a terrible tragedy.”

In a statement, the Harbes family expressed condolences to the victims’ families.

“This is a sad tragedy, and our thoughts and prayers go out to the families of the passengers of the aircraft,” the statement read.